My son, Shane, was busy attending the Christmas party at Chase Field tonight.  He and is wife attended what has to be one of the coolest parties on Earth; the GoDaddy.com event hosted by Bob Parsons each year.  What other company can boast they have not only live music, but the likes of Dierks Bentley, Trace Adkins, AND Kid Rock?  Seriously, people, I tip my hat to Bob Parsons.

And that got me to thinking about some of the other cool things Bob Parsons has accomplished in his tenure as CEO and founder of GoDaddy.com.  He has a take-no-prisoners attitude in business, promotes the most outrageous commercials know to man, incorporates innovative marketing campaigns, and recently went on safari in Africa to kill an elephant.  The elephant hunt gained worldwide attention, due to the footage of the local villagers tearing into the carcass of the elephant.  Obviously I am okay with that, but the PETA people, not so much.  Kudos to you, Mr. Parsons!

Of course, the elephant safari got me to ponder the Great Penguin Hunt again.

One of my associates is, if I may say so, even more committed to the Great Penguin Hunt than I am.  He lives and breathes penguin.  He studies their habits, their hiding places, their diets.  He has even enlisted the help of a zoological psychiatrist; a penguin-whisperer, if you will.  There is quite possibly no one alive today who is better equipped, mentally, to take on a penguin in a fair fight.

That's why it came as a surprise when yet another of my associates informed Greg about a little known fact about penguins --- evidently they are monogamous and mate for life.  Now, we can argue the merit or foolishness of such a practice, but it did present a moral dilemma for Greg. 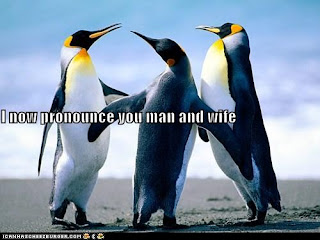 What would be the proper course of action?  Cultures all over the world have struggled with battle for territory and stature.  It is the nature of human beings to divide and conquer, whether it be among enemies or their own loved ones.  It's what we do, simple as that.  We are, however, also a race of evolving beings held captive by the morals and ethics of our ancestors.  It is incumbent upon us to do the right thing, whenever we can, that is.

So Greg fought with this conundrum long and hard.  Satisfy his need and obsession with the succulent meat of a large, flightless bird, leaving another penguin heartbroken and lonely for the remainder of its life or exercising the option of humanity, kindness, and compassion by giving up on the quest altogether?  Greg struggled with this for about thirty seconds and came to the only possible solution...

He'd kill them both.
Posted by Eating Penguin at 1:25 PM